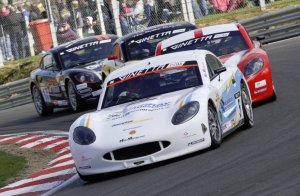 Irishman Niall Murray picked up from where he left off last season, starting the 2012 Ginetta Junior championship in fine style with a win and a second place in two thrilling races at Brands Hatch for his new team, Douglas Motorsport.

It was a superb start to the season for Murray and also for his new team boss Wayne Douglas, who on the debut for his all-new Ginetta Junior squad tasted success as early as the first race of the season.

Hoping to enter the new season as one of the favourites for championship success, Murray qualified fourth and third on the grid for the pair of races at the Brands Hatch Indy circuit, with the front row being filled by Charlie Robertson and Sennan Fielding for both races.

Murray held his fourth place when the lights went out for race one of the weekend, and began attacking Hillspeed’s George Gamble as they headed into Graham Hill bend for the first time, Gamble a driver Murray pointed out as one of his main rivals for this year’s title.

Murray briefly snatched third place from him, but got caught out at Clearways when Gamble snuck back up the inside to take the spot back, the loss of momentum costing Murray another place to Oliver Chadwick under braking at Paddock Hill bend for fourth. Harry Woodhead added to the problems by squeezing him out onto the grass at Druids and dropping him behind William Palmer briefly, before the Palmer spun off into the Clearways gravel trap.

The race then turned around as the safety car came out, and Murray then put together a great recovery drive.

Leader Robertson unexpectedly pulled off into the pits with mechanical problems, while Murray passed Chadwick who was struggling with a loose bonnett. He then nudged past Woodhead at Clearways for third, before taking advantage of a coming together at the same corner between battling lead duo Fielding and Gamble, the delay gifting Murray the race lead.

Gamble recovered to second and chased down Murray, but the Irishman held on to take a hard-earned victory, only 0.133s ahead of Gamble at the flag.

Murray showed his intent immediately in race two with a good start and then pulling off a fine move up the inside of Fielding heading down through the first corner to move up into second place, where he began to chase after leader Robertson.

He then spent the first half of the race chasing the rapid HHC Motorsport driver, but could not quite get close enough to him and had to settle for a comfortable second place, consolidating an eight point lead in the drivers championship over George Gamble as the series heads to Donington in just over a week’s time.

After the weekend, Niall said it had been the perfect start to the season.

“This has been a fantastic start to our season, just what I would have hoped for,” he said. “We have a good lead in the championship to build on as we move to Donington.

“I have to say a massive word of thanks to my sponsors and my team Douglas Motorsport who prepared a fantastic car this weekend. Also well done to my team mate Andrew Watson finishing seventh in race two.”

His team-mate Watson was unlucky in qualifying as problems with his exhaust restricted him to two 10th place starts, but he showed his fight with two solid comebacks to move up to sixth place in race one after avoiding Pepe Massot’s spinning car, and then making a great start in race two to leap up to sixth place, finishing seventh after a race-long battle with Massot and Palmer after the Spanish driver dived past the pair at Paddock Hill bend.

Team Principal Wayne Douglas expressed his delight on Sunday evening: “I’m delighted with how the season has started. I knew we had two of the best drivers out there. Both put on a great display of driving and we look forward to building on our championship lead in Donington.”