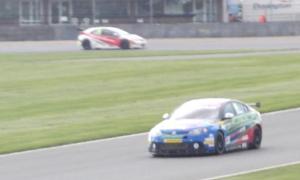 The championship leader set the first respectable time in the early stages of the 30-minute session to go to the top of the timesheets, but Plato’s effort was quickly beaten by closest rival Matt Neal seconds later.

Plato was quick to readdress the situation and responded with lap time of 1m10.604s to move back ahead of the Honda driver, despite the new MG6 carrying the maximum 45kg of ballast for his success at Brands Hatch.

The time would prove to be unbeatable as a light shower 10 minutes into the session brought proceedings to a halt somewhat, Neal’s Honda team-mate Gordon Shedden then popping up to second place, a mere 0.054s off Plato’s pole position time.

As the rain passed by, the session saw a late charge from several drivers, Andrew Jordan moving up to fourth place to make it three Hondas on Plato’s tail for tomorrow, despite the Civic’s apparent straight-line speed deficit.

His late effort bumped Mat Jackson to fifth place after a competitive showing for Redstone Ford, while Rob Collard also put on a last-minute surge to leap to sixth place in the West Surrey Racing BMW.

He also took advantage of an unlucky Rob Austin, who was running in the top six early in the session before having to pack up early due to a spark plug problem.

“Oh yeah, it’s annoying,” said a gutted Austin. “But what can you do?”

“We broke a spark plug which is a bit of an odd one really. Hopefully we’ll get it sorted for tomorrow.

“It was a purple (fastest) sector on that last lap as well…we all know where that was going.”

Austin still finished eighth behind Brands polesitter Dave Newsham. The ES Racing driverwas caught out by the weather when the fastest laps were set but did claw back some ground in the closing stages to move from 11th up to an eventual seventh place.

Jeff Smith and Aron Smith rounded out the top 10 with good showings for Eurotech Honda and Redstone Ford respectively, both bumping Frank Wrathall (Toyota) and Tom Onslow-Cole (BMW) down the order late on.

Adam Morgan had three offs over the Saturday, while the grid will be topped and tailed by Triple Eight MG6’s as Andy Neate did not complete a flying lap after mechanical problems.