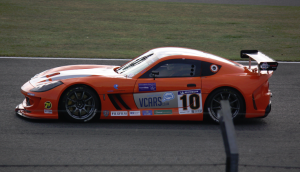 Tom Sharp repeated his feat of 2011 by winning all three races of the opening Michelin Ginetta GT Supercup round at Brands Hatch in fine style, while many of his main rivals had mixed weekends to tell of.

Sharp’s rout started on Saturday when he qualified on pole position for the opening race of the weekend ahead of Andrew Richardson and reigning G50 class champion Tom Ingram, and he got the start he needed to lead the pack into turn one.

The start was much better than Richardson’s, as his creeping before the lights went out cost him when he was given a drive-through penalty which dropped him out of contention.

Jamie Orton was running in seventh place, however he became the first retirement of the season on lap six when he ran wide at Clearways and beached his Fauldsport G55 in the gravel.

Ingram took up the chase of IDL driver Sharp at the front, but Sharp soon began to pull away and drop Ingram into the clutches of Josh Wakefield, the Century Motorsport driver making a strong name for himself very early in the weekend.

Sharp held on to take the first win of the season by almost three seconds over Ingram, who only just held off Wakelfield by a tenth of a second for the runner-up spot. After qualifying a dismal ninth, Carl Breeze climbed up to fourth place, while Hunter Abbott and Fergus Walkinshaw completed the top six for Century Motorsport.

Race two was again all under Sharp’s control, as having made another good start to lead the field into turn one, he took a second lights-to-flag victory.

The man who looked to have made the best start was Wakefield from row two, but as he squeezed inside Ingram for second, Wakefield clipped the edge of the pitwall and broke the front suspension of his machine, forcing him into retirement.

Breeze therefore inherited second from the delayed Ingram, and the pair began a battle that was soon joined by Andrew Richardson who dispatched Fergus Walkinshaw at Paddock Hill Bend for fourth.

Ingram was clearly faster than Breeze and began to ramp up his attack on the Tollbar Racing with WIRED driver, but as he was held up under braking into Paddock, Richardson braked later than both and tried to go around the outside of the JHR driver.

Ingram’s car lost control over the bulky inside kerb and despite his best efforts to save the car, it snapped sideways and into the side of Richardson, spinning the two cars into the scenery and out of the race, where they then had words with each other trackside.

With Marcus Hoggarth’s stranded car at Clearways adding to the situation, the safety car wiped out Sharp’s healthy lead. On the restart he made no mistakes however, and from then on was untroubled as he took another win by over five seconds at the flag.

Breeze was caught napping on the restart as Walkinshaw drove round the outside of him at Paddock, while Colin White began his charge to the podium by nerfing his way past Abbott at the same corner for fourth before demoting Breeze further with a better drive out of Clearways on the same lap. Breeze, it seemed, was in trouble.

White then surged up to second place with a move on Walkinshaw not long after, while a slipping clutch meant Breeze was suffering, and he was powerless to stop himself falling down the order over the latter third of the race, finishing a lowly 12th – last of the finishers.

Behind winner Sharp, White took his best result in the series with second, while Walkinshaw took an impressive third place for Century Motorsport ahead of Orton and Abbott.

A surprise in the G50 class came from rookie Max Coates, who took victory in a thrilling battle in class which was initially led by Davies, but a mistake on lap 16 gifted the lead to Ian Parsons, with Coates in hot pursuit after the pair squeezed past Reece Somerfield for second at Paddock and Druids.

Ginetta Junior graduate Coates then pressured Parsons into a vital mistake, braking too late and leaving the door open at Druids allowing Coates through for a maiden G50 victory.

The top four were reversed for race three, but a slow start from polesitter Orton lost him the lead immediately to Walkinshaw, while a fast-starting Sharp went around the outside under braking at Druids to snatch second place.

Sharp could sense a triple win, and on lap two attacked Walkinshaw on the inside at Surtees, but the Century driver squeezed him out on the exit of Clearways.

Chaos then errupted when Sharp cut to the inside on the pit straight and mistakenly tagged the rear of Walkinshaw’s car, spinning him into the concrete wall and across the circuit into the tyrewall, White spinning after being hit by Abbott in the bottleneck, before Somerfield’s G50 arrived at full speed into the back of Louise Richardson’s car and ploughed hard into the tyrewall.

Somerfield just missed slamming into the stationary Walkinshaw, but the front of the Privateer’s car was written off in the impact. All drivers thankfully emerged unhurt, and the safety car was deployed.

On the restart, new leader Sharp repeated his 2011 feat by completing his hat-trick comfortably for his 12th GT Supercup win, while Orton took a solid second place 8.3s back.

Breeze ran third for much of the race, but again fell foul to mechanical dramas that forced him to pull off into retirement, handing third place to Andrew Richardson who had recovered superbly from 15th to finish third through the carnage.

Wakefield would have finished fourth, but a drive-through penalty dropped him out of the top 10, and later he ended in the gravel after narrowly avoiding Ingram’s spinning car after the JHR man lost the back end at Clearways on the last lap chasing Hoggarth.

Rob Gaffney won the G50 class, pressuring the G55s of White and Hoggarth along the way towards finishing sixth overall.