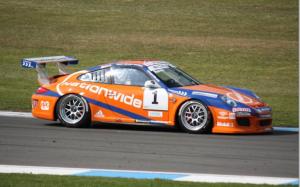 Reigning Porsche Carrera Cup GB champion Tim Harvey has apparently made a shock announcement that he is to step down from the 2011 championship with immediate effect, as a result of feeling that the new regulations meant he felt he was “not able to compete at the same level” anymore.

The shock news came from his main sponsor Nationwide’s Facebook page, which published an article announcing that Harvey was stepping down from the series that he won in 2008 and 2010, as he decided that the new regualtions introduced into the 2011-specification cars were simply not allowing Harvey to fight for the success he has had in the past few seasons.

Nationwide’s Facebook page article quotes Harvey as saying: “Having seen the data from the first six races, I know that I am simply not able to compete at the same level I have over the past seven years in the Porsche Carrera Cup. I think it better to pass the opportunity to someone who richly deserves to be on the grid this year and will be able to gain invaluable experience competing in the championship”

He has therefore decided to step aside in the team to allow for 21 year-old youngster Kieron Vernon to take over the Nationwide sponsored Motorbase car as a gesture of sportsmanship for newcomers to have their chance.

Vernon will replace Harvey from the next round at Oulton Park, where he will be set to finish out the remainder of the season.

Vernon had won the Porsche Scholarship for this season along with Ben Hetherington to aid their path into the sport – as it did with the likes of Michael Meadows and Euan Hankey – but had not been able to make his debut due to a lack of funding available to do so.

Vernon said in article: “I can’t thank Tim, Nationwide and Motorbase enough for giving me this opportunity. Winning the Porsche Scholarship was the proudest moment of my career and being unable to take it up, my worst moment! I aim to do Tim and all his sponsors proud in the Number One car and can’t wait for Oulton Park. With Tim’s guidance and help I couldn’t be learning from a better man, and I hope to be up-to-speed very quickly.”

As well as two championships, the former British Touring champion has had huge success in the Porsche Carrera Cup since joining the series in 2003, notching up an amazing 106 podium finishes and a total of 35 race victories in his years in the championship since leaving behind a long and enviable career in Touring Cars.

Harvey will however compete in the Porsche Carrera World Cup at the Nurburgring in June, stating: “I hope to compete competitively once again in the Carrera Cup in future but, if not, I cannot imagine a better race to end my eight year Carrera Cup association”.