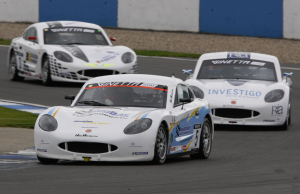 Murray won race one but was excluded from the second after an incident with Robertson. Photo credit: Jakob Ebrey

Niall Murray took his second win of the Ginetta Junior season at Donington park in a weekend tainted by incidents throughout and a race two exclusion that dropped him to second in the championship, while his team-mate Andrew Watson took his first podium finish.

Douglas Motorsport driver Murray came into rounds three and four leading the championship after a great weekend at Brands Hatch two weeks ago, but his weekend at Donington didn’t get off to a great start when, following missing the Thursday test due to budget restricitons, he also had to sit out Saturday morning’s practice session when his G40 incurred electrical problems. Despite the troubles, Murray still managed to qualify a competitive fifth and eighth place on the grid respectively for the two races.

In the first race later that evening, Murray looked to have made up for the issues when he made a superb getaway as the lights went out to challenge the Hillspeed pair of George Gamble and Nathan Harrison into turn one, the Irishman slotting his car between the pair at Redgate before taking the lead from polesitter Gamble into Coppice for the first time.

The lead changed hands a few laps later when Gamble bounced his car over the kerbs at the chicane making a lunge, before the field was bunched up behind the safety car.

The pair’s battle resumed on the restart, where Murray tried to repeat the move he did on lap one at Coppice. Gamble shut the door this time however and the pair made contact that sent Gamble into a spin. As the Hillspeed driver tried to gather up the situation, he came across the circuit into the path of the oncoming pack, resulting in many cars suffering damage and the race being red-flagged as a result of the mess.

All drivers escaped injury although Gamble was taken to hospital, and after a long deliberation the race win was handed to Murray during post-race enquiries on Sunday morning, Murray also being handed three penalty points for his part in the accident.

” I made a fair move on George and it was unfortunate that contact was made.”

The second race was a disappointing one for Murray, although it started briliantly with a superb jump from eighth to second as the field left Old Hairpin for the first time and finishing the opening lap third after Sennan Fielding outbraked him at the chicane.

Murray and Charlie Robertson both took Harrison for second and third but on lap four Robertson bumped Murray into a half-spin at the chicane, dropping him down to 10th place and forcing Beacon Racing’s Harry Woodhead into the tyrewall in avoidance.

Murray made his way back up to the tail of sixth-placed Robertson on lap eight, where the pair again collided when Murray hit the back of the HHC Motorsport man at the ultra-quick Craner Curves and spun him into the gravel.

“I was running bumper to bumper with Charlie through the Craner Curves and as I attempted to move to the inside of the circuit for the Old Hairpin, Charlie broke much earlier than I expected and I caught the rear of his car. For the second time during the weekend I was given penalty points and this time it was four. I had to admit it was my mistake but I think it is very unusual for 4 points to be handed out.”

Murray was the big loser from the incidents with Gamble in race one and then being excluded from race two for the incident with Robertson at Old Hairpin, picking up seven penalty points and losing a total of 39 championship points that sees him now second in the standings

“Clearly this weekend is a missed opportunity,” said a reflective Murray. “we had great pace in each race and we should be leaving here with a strong championship lead, but I can’t turn back the clock!

“I seriously considered quitting the series because of the events during the weekend but after discussion with my family we have decided to continue and try to challenge once more for the championship.”

His team-mate Watson meanwhile achieved his goal of a podium finish in only his sixth Junior race, the Irishman taking advantage of his team-mate’s spin to move into the top five before making a move on Ginetta Scholarship winner Oliver Basey-Fisher for fourth.

He then passed Harrison with a great exit from Coppice to snatch third, following Pepe Massot home to join the Spainiard in taking his first podium in the series.

“Two or three drivers went off in front of me, but I don’t think I was gifted it too easy,” said a delighted Watson. “I still had to pass a few people.

“It felt like I drove very well and took my chances when they were on and was delighted with my race. The podium hasn’t quite sunk in yet, I’m just delighted. That was my goal for the season, to get a podium, and for it to happen on the second weekend is massive for me and gives me a big confidence boost going into the rest of the season.”

JHR driver Fielding took the lead on lap two from Harrison to go on to win by 7.3s, and he will lead the championship by 23 points from Murray who slipped to second, while Watson now jumps to third only a point behind his team-mate, as the series next moves on to Thruxton on April 28/29.