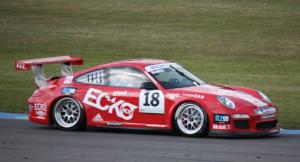 Euan Hankey hit back in the second Porsche Carrera Cup GB race at Knockhill with a comfortable win over Michael Meadows who extended the points lead that he took from race one.

The front row contained the same protagonists but this time it was team Parker driver Hankey that started from the pole position, with race one winner Meadows alongside him.

Hankey then made a blistering start from the front to head the field by a couple of car lengths from Meadows, with Ben Barker and James Sutton slotting into third and fouth place having started from the same positions.

Meadows briefly kept Hankey honest at the front of the field with fastest lap of the race in the early stages, but Hankey soon upped the pace and began to stretch out a healthy advantage which he extended to a 4.553s gap by the time he completed the 32nd and final lap to take a comfortable victory.

Behind the top two, Barker took a fantastic podium finish in third place, just over a second ahead of Sutton. Meadows therefore extends the championship lead that he took in race one to nine points over Stephen Jelley as the series heads to Rockingham next weekend.

Jelley spent the opening laps of the race in a battle with Ben Hetherington, briefly ovetaking the scholarship winner at the hairpin on lap six but running too deep and allowing Hetherington the momentum to re-take the place after some grear side-by-side racing through Leslie’s.

But Jelley continued trying to find a way past and finally got a run on lap 13 coming out of the hairpin and outbraked Hetherington on the inside into the first corner for fifth place, which he held to the flag after a somewhat disappointing weekend.

In a chaotic race for Pro-am1 drivers, the battle between Jelley and Hetherington potentially cost Rory Butcher the win in class as he attempted to challenge Jelley for sixth into the hairpin, allowing Jonas Gelzinis to get a cutback to the inside off the corner and slide up the inside into turn one.

Butcher kept Gelzinis right in his grasp but could not quite get close enough to make a lunge, before being gifted the lead and eventually the win in class on lap 16 when the Lithuanian went off through the gravel after bouncing over the kerbs at the chicane to avoid the slowing John Taylor.

Gelzinis dropped into a battle with Derek Pierce and Ahmad al Harthy, overtaking Pierce into Leslie’s as the trio ran side-by-side down the main straight, al Harthy copying the move a lap later on Pierce before attacking Gelzinis all the way to the flag, a long way behind winner Butcher who finished seventh overall.

George Brewster took a double win in Pro-am 2 to take over the class points lead from the unlucky Keith Webster after an early battle with Pro-am1 driver Daniele Perfetti, who later had a tangle at the final hairpin with Richard Denny that sent the pair spinning.