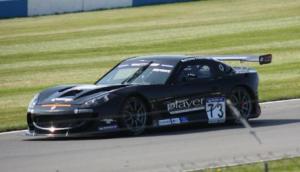 After a season starting with a horrific run of bad luck, Nathan Freke finally took his first win of the season at Oulton Park, while Stefan Hodgetts sensationally made a winning start to his first weekend in the championship.

After first three meetings dogged by misfortune due to mechanical woes, 2009 Ginetta G50 Cup Champion Freke secured his first victory of the year in Round 10 after coming out on top in a battle with Carl Breeze to claim a win that had been coming for a long time in the 2011 campaign.

It was his main rival Breeze who led the field away from pole position in the first race of the weekend, as Freke slotted into second place ahead of Stefan Hodgetts, the ex-touring car driver and Clio Cup and Porsche race winner making his debut in the category with fellow newcomers JHR Developments, while Tom Sharp and Adam Morgan rounded out the top five, but not for long as Sharp was soon up to third past Hodgetts at Cascades.

Lap two saw Colin White move into the top six, also making his move at Cascades to dispose Freddie Hetherington of a position, all ahead of the G50 Cup class leader Tom Ingram who was running a solid eighth.

There was then drama as on lap three as championship leader Sharp had a moment that dropped him down the order, where he would eventually finish well down in a dissappointing 12th place.

Breeze looked to be comfortable at the front, but the pace changed towards Freke who began to close in on the Total Control Racing team driver, and on lap eight Freke took over control as he passed Breeze to take the lead.

Freke then pulled away to win by 6.8s at the flag for his first win of the season ahead of Breeze, who manage to fend off a hard-charging Hodgetts for second place. Sharp’s disaster worked out perfectly for Morgan who finished fourth, while White came out on top in his battle with George Murrells for fifth after Hetherington’s demise.

The G50 Cup drivers again provided the fans with some great racing, as while Ingram pulled away for his sixth win of the season in seventh place overall ahead of Jake Hill, a thrilling scrap for third between Aaron Williamson, newcomer Lee Pattison and Jody Fannin was breaking out behind, of which Williamson came out on top in as he just pipped Pattison to the flag for third by less than two tenths of a second.

In race two it was all about a storming drive from Hodgetts on a damp and slippery circuit, as he muscled past Breeze at the start despite being forced out onto the grass at the first corner.

He then instantly caught race leader Freke and by the time they rounded the hairpin next time round Hodgetts was the new race leader, and began setting the pace as he pulled away from Freke and Breeze and left them to battle it out for second place for the remainder of the race.

Meanwhile the conditions then caught out several drivers, as after their battle in race one for fifth place, White firstly ended his race in the tyre wall at druids, while his sparring partner Murrells also had a moment at Cascades that dropped him down the order.

As Hodgetts went on to take his first win in the Michelin Ginetta GT Supercup by just over three seconds, Freke then almost gave away second place late in the race as he outbraked himself at the final corner, but Breze was not close enough to capitalise as the race one winner gathered it up and avoided the gravel to hang on to second place.

The reason Breeze could not capitalise was because he himself was sustaining massive pressure from Sharp, but again the mistake was made by the latter as Sharp ended up dropping down to sixth place after another moment, allowing Breeze to cruise home in third. After a difficult weekend, Sharp’s championship lead was trimmed significantly by Breeze, who now lies only 25 points behind after Sharp’s whitewash of the first two rounds.

In the G50 class it was all about the dominance of Ingram in race one, but in the slippery conditions the man that was on form was ex-Clio Cup racer Pattison, who made light work of Hill for second place before catching and outbraking Ingram on the inside at Lodge.

Ingram then found himself being mugged by the pack of G50s and dropped to the back of the train after saving a sideways moment at Old Hall that saw him bouncing over the grass, as Pattison cruised to a sensational class win on his first weekend in the series.

Ginetta G50 standings after round four: