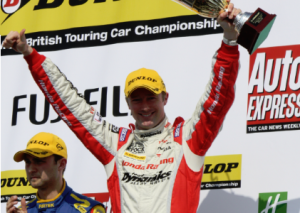 Gordon Shedden extended his championship lead with victory in race two at Oulton Park by holding off Andrew Jordan, while Jason Plato recovered from the back of the grid to third place to deny Dan Welch a podium for Proton.

The Scot took advantage of collision between Mat Jackson and Rob Collard while the pair battled for the lead to sntach a lead he would never lose, and now holds a 13-point lead in the series heading into the day’s final race with the win and fastest lap.

His Honda Yuasa Racing team-mate Matt Neal started form pole afte rhis race one win, but was again beaten away from the start by Rob Collard who weaved his BMW around the outside of Riches to take the lead, Jackson moving past Jordan for third.

Jackson then made his way past Neal with superior grunt down the back straight, before beginning to close down on leader Collard quickly.

Behind them the man on the move was Shedden, who passed Jordan into the last corner with a great exit from Druids, before squeezing inside his team-mate Neal at Cascades two corners later, Neal dropping back behind Jordan as he struggled with maximum ballast.

Neal came under pressure from the impressive Dan Welch in the Proton who then made his way into fifth past the reigning champion, while Will Bratt was running an impressive eighth before his Audi ran straight on at the chicane exit with what looked like a steering problem.

The lead battle began to really heat up as Jackson upped his attack on the BMW driver. Then on lap seven Jackson nudged the WSR driver a bit wide at the hairpin, Collard tried to squeeze him to hang onto the lead but the pair made further contact that almost spun Collard, but left them both limping back to the pits with punctures.

Shedden stole the race lead from the incident with Jordan right on his tail, while Welch moved up to a sensational third. Jason Plato meanwhile was charging through the field having started last after a suspension problem prevented him from starting race one, and moved past Neal without drama by outbraking the Honda into turn one.

He then chased down Welch and finally pressured him into braking slightly too late at the final corner, cutting back up the inside to snatch third.

Up front, Jordan was keeping Shedden honest just like with Neal in race one, but couldn’t quite get close enough to make a lunge on his Honda compatriot. Shedden then put in the fastest lap of the race to cement his lead, and took his fifth win of the year, 1.229s ahead of Jordan who racked up more crucial points with another solid podium finish for the Eurotech/Pirtek Honda team.

Afterwards, a delighted Shedden told ITV4: “It didn’t look like it after race one, but we turned the car around and race two was a totally different kettle of fish, and the race just seemed to come to me. It looked pretty fiesty and fortunately for me it all fell into my lap.

“Andy’s got the same car as me and he’s on it this weekend and driving really well, and I suppose the only saving grace is that I know where my car’s good and where mine was a bit weaker and that his car’s going to have the same kind of problems.”

Plato joined the pair on the podium, while Welch took a fantastic fourht in the Proton Persona ahead of Neal, Nick Foster (BMW) and Lea Wood in an impressive seventh in his Vauxhall Vectra.

Liam Griffin recovered through early carnage to finish eighth, while Tom Onslow-Cole and Dave Newsham made their way up to a top 10 finish.

Andy Neate didn’t have as much luck as he was bumped across the grass at Knickerbrook by Frank Wrathall in the early battle for ninth before retiring after a mechanical problem-induced spin, while Wrathall went off at Cascades shorthly after.

The top nine will be reversed for the final race of the day, meaning Onslow-Cole will start from pole position ahead of Griffin, with Wood third.