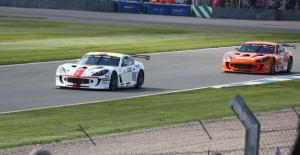 Tom Sharp continued his sensational start to the 2012 Michelin Ginetta GT Supercup with two more wins to extend his championship lead at Donington, but his run came to an end in race three when Tom Ingram took his maiden victory.

IDL driver Sharp had again claimed an easy pole position on Saturday and later in the day made a great start to lead race one into Redgate for the first time, while a slow getaway for fellow front-row starter Ingram saw him behind Carl Breeze to third.

Sharp was then given the chance to pump in some quick laps wile Ingram piled heaps of pressure onto Breeze over the early stages of the 12-lap race, but the Tollbar Racing with WIRED driver held on to the place with some good defensive driving.

Andrew Richardson joned the party but could not get close enough to make a move on the pair, as Sharp cruised home to a 2.7s victory, his fourth of the season.

Breeze managed to find some pace to edge slightly clear of Ingram and claim second place and his first podium of the season, while Richardson retired after suffering an off during the race, promoting Josh Wakefield to fourth place ahead of Hunter Abbott and Colin White.

Louise Richardson started from pole in G50’s, but a slow start dropped her behind Max Coates and Rob Gaffney into Redgate for the first time. Coates and Gaffney continued their battle side-by-side down through Craner Curves, Coates squeezing ahead at the Old Hairpin where he would not be touched from then on for the class win, Mark Davies winning the battle with Gaffney for second in class.

Race two lasted one corner for Wakefield after contact into turn one with Abbott, Sharp again making a good getaway to lead Breeze, Ingram and the battle for fourth between White and Abbott.

The battle eventually ended in tears when White hit Abbott and spun him at Old Hairpin just as the safety car was brought out.

On the restart, Sharp was untouched again and took his fifth win in a row and moved a step closer to another hat-trick, ahead of Breeze who again held off an attacking Ingram for second.

The action was all in the G50 class, Davies making a great start to lead but dropping to third to hand the lead to Gaffney again still on lap one, but Gaffney with Redbrick’s Coates all over the back of him. The pair’s battle was interloped by the G55 of Marcus Hoggarth at times, Coates nudging into the rear corner of Gaffney into Redgate as he tried to squeeze through.

Coates eventually made his move four laps form the end, Davies following him through but not able to pressure the new leader into a mistake, Coates taking his second class win of the day.

Race three saw Hoggarth on pole with the top five reversed, but he bogged down allowing White to take the lead into Redgate ahead of Hoggarth’s JHR team-mate Ingram, Sharp slotting ino third place after another good start.

White immediately lost the lead exiting Old Hairpin to the late-braking Ingram, Sharp following him past the CWS driver heading into Mcleans.

Ingram used the early laps well by pulling out a small cushion on the championship leader, while his team-mate Hoggarth dropped from fourth to last after a mistake on lap four when he went off into the gravel at McLeans.

Andrew Richardson’s tough weekend continued when he was forced to pit with yet more mechanical problems, while Ingram’s lead was being trimmed slightly by Sharp, but without danger to the leader. That all changed when the field were bunched up behind the safety car after third-placed White lost a tyre and spun off into the Mcleans gravel trap, almost rolling as the car dug in.

On the restart, reigning G50 Cup champion Ingram continued from where he left off after a great initial jump, and held onto his lead to claim his first overall G55 win and break Sharp’s run of five victories, Abbott coming home a strong third despite his spin.

The drive of the weekend came from Breeze who fought his way through from the back of the grid to fourth place at the flag ahead of Fergus Walkinshaw, while sixth went to Wakefield who was another driver to fight through from the rear to take sixth ahead of Jamie Orton.

Coates lost the G50 lead off the line to Davies as well as second to Gaffney later on the first lap, before reclaiming second spot on lap three and then disposing Davies of the lead not too long afterwards.

He came under intense pressure from the trio of Davies, Gaffney and Louise Richardson after the safety car period, but the Yorkshireman held them off to claim a briliant hat-trick of G50 victories at Donington. 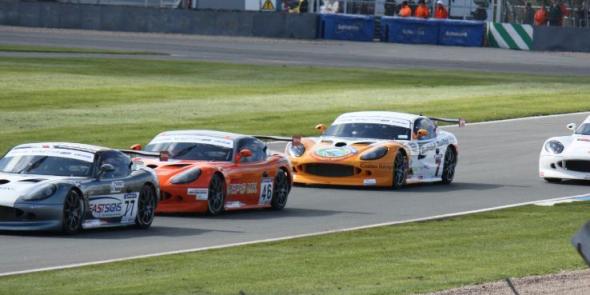 Max Coates (third in shot) took a sensational treble in the G50 class.

A delighted Coates said: “It’s going really well. We’ve had two bad races where the gearbox didn’t really work and when the anti-rollbar snapped, and to be honest them two we couldn’t win, and in terms of races we’ve had a really good chance of winning, we’ve gone on and won. I’m absolutely over the moon!”

G55 standings after round two: