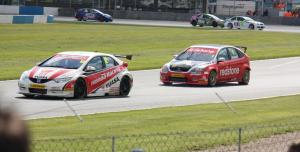 Mat Jackson made it two wins at Donington Park by coming through an action-packed reverse-grid race on top, but there was more drama after the race when Gordon Shedden was handed the win despite finishing third on the road.

Jackson made a superb start from fourth on the grid to outbrake the Eurotech Honda of Andrew Jordan heading into the first corner, but both he and Jordan slid wide on cold tyres at the first corner allowing Dave Newsham to snatch the lead, while Jordan slipped to seventh.

Newsham was immediately under huge pressure from Rob Collard, but on lap three the BMW driver made a mistake at Old Hairpin and got onto the grass, before rejoining into the path of his WSR team-mate Tom Onslow-Cole who had nowhere to go but clip the rear of Collard and take to the grass himself, dropping well back.

The mayhem continued into Mcleans as Jordan braked to avoid the action and was hit up the back by fellow Honda driver Matt Neal, the pair performing a synchronized spin together that saw championship leader Neal beached in the gravel.

While this was going on, Jackson was busy taking the lead from Newsham with a better run out of Coppice before the safety car was scrambled, Shedden almost spinning into the pit lane attacking Collard for third.

On the restart it was Collard who attacked, passing Newsham at Coppice corner before Shedden made a brave move stick at Craner for third on the Vauxhall man. Shedden then caught Collard and briefly made the move at Redgate before making it stick when the BMW ran wide at Old Hairpin

Jason Plato was the man on the move from 17th on the grid, and after making it up to ninth before the safety car, continued carving through the field. He then took advantage of the impressive Tony Gilham attacking Newsham to take fifth at the chicane, before repeating the move on Newsham exiting Coppice for fourth.

The last laps were a tense affair as the top four bottlenecked together, Plato moving to third past Collard heading into Old Hairpin, before attacking Shedden for second.

On the last lap the lead trio were glued together, and as Jackson held on to claim his second race win of the day, Plato pushed Shedden wide under braking for the chicane and the pair went through the gravel, the MG beating the Honda to the line.

But after the race there was more drama when Jackson was excluded from the results for a technical infringement, while Plato was given a two-second penalty for the contact at the last corner.

“I just locked up,” said Plato afterwards. “Almost identical to race one when Mat (Jackson) locked up behind me.

“I’ve had a few races at Donington where I’ve come from the back of the grid, and it’s always great to do that because the fans love to see that,” he added.

This gifted Shedden his second win in a row ahead Plato, while Gilham inherits a sensational third place after passing Collard late on. Jeff Smith and Andrew Jordan were next up, ahead of Frank Wrathall (Toyota), Dan Welch (Proton) and Onslow-Cole recovering to ninth ahead of Lea Wood (Vauxhall).

Before receiving the news he had been given the win, Shedden was not happy with Plato’s move.

“He just shoveled me off at the last corner. You can’t talk your way out of that.”