Delighted Plato says there is still “more to come” from MG6 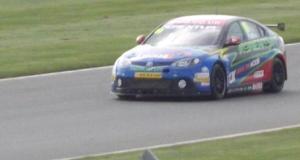 Following claiming an unexpected pole position at Donington Park earlier today, Jason Plato sent a message to his opposition by saying that there is still a lot more to come from the Triple Eight Racing MG6 as the season rumbles on.

After a dream first weekend of the season at Brands Hatch where he took a victory and left with an unexpected championship, Plato continued his explosive form by taking the first pole for the NGTC-specification MG6.

Obviously delighted by achieving the feat, he said that he felt the car was a lot better to drive in qualifying than at the season opener, and that it was crucial to get the lap in as early as he could with rain later disrupting the session.

“It’s lovely isn’t it? said a delighted Plato. “What a result for the team, it just gets better and better.

“My car was fantastic to drive in that session. We looked at our weather forecaster to assess the situation because we knew we had to do it quickly.”

Despite carrying maximum ballast for leading the championship, Plato was in contention all day at Donington, and ominously said that there is still a lot more pace to come out of the MG6 over the season as the team continue to learn more about the new car, which barely turned a wheel before the season opener.

“After the first practice session we made a few changes to the car to try to discover where the window of performance is.

“We’re learning all the time,and there’s still so much to come from this MG KX Momentum Racing team.

“As i’ve said before, I’m only a small part of this team. Everybody here’s worked very, very hard, and I know that’s an often overused expression in this game but genuinely they have, and this is a great present for them.”