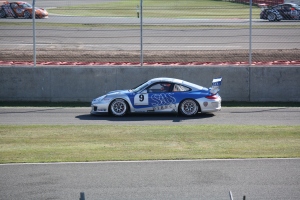 Last season’s Porsche Carrera Cup Great Britain runner-up Michael Meadows started the season in perfect style by crossing the line first in both races at Brands Hatch, but a race one penalty handed Richard Plant his maiden series victory to deny him the double.

Meadows picked up pole position for the pair of races at the Kent-based circuit, and in the opening encounter the SAS driver made a good start to head the field ahead of Parker Racing’s Plant who retained his second place on the grid, the pair leading the way all race from there on.

A good restart following a safety car period for an accident betweenPro-Am2 pair Tautvydas Barstys and Jean Glorieux gave Meadows a safe cushion over Plant, the pair immediately pulling away from the rest of the field headed by reigning Pro-Am1 champion Jonas Gelzinis in third.

Meadows had grown a lead of 1.3s after nine of the 34 scheduled laps, until Plant was then gifted the lead in controversial fashion.

TOCA all weekend had been punishing drivers for straying wide once too often at Graham Hill Bend, and hit Meadows with a five second penalty for infringing just that which dropped him to fourth place behind Gelzinis and Sam Tordoff.

He quickly tried to address the problem with a hot lap in clear air that moved him ahead of Tordoff into third, but he could not close the aggregrate time difference to Gelzinis to grab second place.

Behind Tordoff in fourth, Ben Barker was fifth ahead of Glynn Geddie and Rory Butcher, while scholarship winner Daniel Lloyd had a disappointing race after qualifying third. The Porsche rookie dropped to fourth behind Gelzinis on lap one, but a left-rear tyre drama allowed Tordoff to close up.

On lap 10, Lloyd’s left-rear spectacularly gave in entering the daunting Paddock Hill bend under braking approaching 140mph, the blowout sending him spining like a top into the gravel trap for an unlucky retirement.

Pro-Am1 was dominated by Derek Pierce, the Scotsman taking the lead on the start by out-dragging class pole-sitter Ahmad Al-Harthy then diving inside Oman driver as they headed into Paddock Hill bend for the first time. Michael Leonard made it a Team Parker Racing one-two in the in the class when he also slipped past Al Harthy on lap two.

Barstys and Glorieux’s accident left only Will Goff and Tania Mann in contention for Pro-Am2, and it was Goff who won when Mann – the first woman to compete in a full PCCGB season – pitted for an unscheduled stop.

The second race was a case of picking up from where he left off for Meadows, as a great start saw him surge into an early lead from fellow front-row starter Lloyd, with Gelzinis, Tordoff and Geddie running in close company behind them.

Plant’s chances of victory fell to pieces at the start as he got a shocker away from the grid with wheelspin, dropping down to sixth, but the race was quickly under safety car when Pierce crashed heavily at Paddock Hill bend after clipping Al Harthy.

Another man having a shocking start was Barker. The Parr Motorsport driver got away cleanly from sixth on the grid, but had a lurid half-spin at Paddock Hill that dropped him down the order to 13th. His recovery drive was one to marvel at however.

While Pro-Am2’s Goff was involved in a messy incident at Druids with Mann on the restart, Meadows and Lloyd got a drop on the pack on he restart, but Plant’s race went from bad to worse meanwhile when he was handed a drive-through penalty.

The leaders had split into two battles from there on, Meadows holding off Lloyd who remained on his case, while the pair began to drop Gelzinis and Tordoff.

There was then a brief nervy moment for everybody when Leonard’s car dropped coolant around the racing line, and Lloyd almost saw his chance to threaten the leader  as the SAS car of Meadows got sideways over the slippery surface, but it was to no use.

Barker further back was on a charge, and his recovery drive saw him move into the top 10, passing Chris Dymond at Paddock Hill under braking, repeating the move on driver after driver.

Butcher’s race was an eventful one, passing George Brewster who was in a battle with Victor Jiminez in Pro-AM1 before having a huge rallycoss moment through the grass on the main straight after a squeeze. Mann’s eventful race meanwhile finally ended in the gravel trap at Paddock Hill. Meadows getting away out front. Mann off again (paddock hill)

Meadows began to pull away slowly from Lloyd at the front, and took the checkered flag again to win the race and take the championship lead in the process, Gelzinis rounding off the top three by edging away from Tordoff who had pressued the Lithuanian all race, and Barker in fifth.

Barker’s charge moved him up into the top six, and he then calmly outbraked Geddie to complete his recovery with fifth place ahead of team-mate Dymond, while Geddie dropped back late on.

Al Harthy looked to have the Pro-Am1 class wrapped and delivered to him, but he and Geddie dropped back after a moment that saw Al Harthy finish third in class down in eleventh place overall, behind Ollie Mortimer who inherited the win, and Brewster in second.

Barstys took victory in Pro-Am2 without drama this time, but only just as he beat Goff to the line by 0.125s.