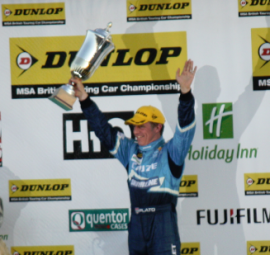 Race three saw a fairytale result for Triple Eight Racing and Jason Plato as they took victory and he championship lead in another dramatic race at Brands Hatch, which was red-flagged initially after an early pile-up.

Not only that, but Plato also leads the points table as the series heads to Donington Park in two weeks time…

Collard made another lightning start in the WSR BMW to leap from third to the lead, while Mat Jackson in the Redstone Ford moved inside Pole-sitter Ollie Jackson’s Volkswagen at Paddock Hill bend to snatch second.

The VW driver then lost a place to Rob Austin’s Audi and a further two places to Andrew Jordan and Jason Plato, before dramatically losing control under braking for Druids and spinning into the tyrewall.

This turned out to be caused by oil dropped from Mat Jackson after a mistake at Paddock Hill, resulting in a touring car scrapyard as  Tom Onslow-Cole, Dan Welch, Tony Gilham, Adam Morgan, Liam Griffin and Tony Hughes all piled off as well, causing the race to be stopped temporarily.

On the second start, Collard again made a great start to lead Austin’s Audi, while race two winner Matt Neal lost control and had a huge slide through the grass at the first corner, dropping to second last as a result.

Dave Newsham made a move on Plato for fourth at Graham Hil bend when the MG got sideways, but Plato recovered and overtook the Vauxhall once again exiting Clearways.

Austin then began chipping Collard’s lead away with Jordan and Plato in hot pursuit, before Jordan took second from Austin with tight exit from the final corner, Plato repeating the move to pass the Audi driver a lap later on lap seven.

A lap later, Jordan took the lead by diving inside the BMW at Clearways, and Plato inevitably repeated the move to demote Collard to third.

The double champion began his chase of the Eurotech Honda Civic, and began putting Jordan under serious pressure.

The youngster however was not to be rattled, and despite Plato offering a few love taps on his rear bumper, Jordan stuck to his defensive lines well, but on lap 15 he ran wide at Clearways and that was all the invitation Plato needed to take the lead of the race.

Plato edged away and completed the last five laps to take the checkered flag first and take the Triple Eight team to a remarkable first win with the NGTC MG6, ahead of Jordan who completed a strong weekend for Eurotech, and Newsham who outbraked Collard into Clearways for a fantastic podium for ES Racing.

“Without Triple Eight’s complete and utter dedication we wouldn’t be here, it’s an absolute pleasure to work with them. “We’ve got a proper programme together, and we’re doing it in style.

“Thank you to everybody and all our supporters, it’s a great feeling.”

Another man who almost had a fairytale story to tell was Gordon Shedden, who having been given a second chance after his car suffered another mechanical problem before the red flag, made his way up through the field on the restart, passing Austin before taking Collard and Jeff Smith for fourth after a collision between the pair at Surtees.

Shedden however was later disqualified, meaning Jeff Smith finished fourth ahead of Austin, Collard, Neal and Aron Smith, while Lea Wood and Gilham rounded out the top 10.

Plato also leads the championship after the first round on 52 points, four ahead of Matt Neal on 48, while Andrew Jordan holds a close third after two second places.