Neal: Honda “there or thereabouts.” 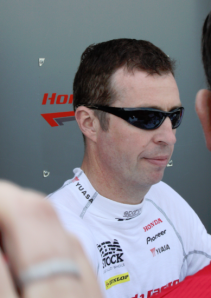 Reigning champion Matt Neal has said that the team are still expecting to be contenders for victory this weekend at Brands Hatch, as they continue to get to grips with the new Honda Civic.

The triple champion has his sights set on an unprecedented fourth BTCC title, and is ready to take the fight to his rivals in Honda’s new NGTC (next generation touring car)-specification Honda Civic.

Neal says that the new car will inevitably encounter some teething difficulties, and that although they are not quite where they would like to be, the team will be in the mix after they get a handle on the machinery.

“It’s going to be a new thing for us now we’ve got these new regulations. We’ve got a lot to learn and very quickly.

“There’s a lot of problems we’re just trying to iron out so we’ll see.”

He does however believe that the team will still be title contenders, and qualifying has proved that the car has reasonable pace with Neal, Gordon Shedden and Eurotech’s Andrew Jordan showing solid pace at Brands Hatch.

“You’re always going to chase for wins and that’s what we’re here for.

“I think we’re there or thereabouts. It’s going to be a big ask this year for both teams.”

Neal also pointed out the number of serious contenders for success that feature in this year’s championship, and singled out those that he believes will be strong, most notably the man who will start from pole position tomorrow, Dave Newsham.

“Dave Newsham I think is going to be up there,” he said. “Also Mat Jackson in the Ford, and the BMW’s are looking quite strong.”

Qualifying went well for Neal, and although he missed out on pole position to surprise package Newsham, he will start tomorrow’s first of three races from the front row, while team-mate Gordon Shedden will start ninth after a day troubled by electrical problems.