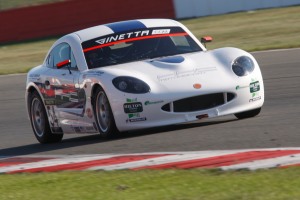 Northern Irishman Andrew Watson’s first weekend in the BTCC-supporting Ginetta Junior championship at Silverstone went as well as he could hope for, picking up an impressive sixth place in the final race in his bid to earn a full-time drive next season.

Making his debut in the Ginetta Junior Championship at the final weekend at Silverstone, Andrew Watson was hoping for a good strong consistent run in aim of a full drive for 2012. The Irish Ginetta Junior star adapted to the G40 very quickly and, full of confidence, went to Silverstone brimming with confidence for the challenge.

Qualifying was one of the closest all season, and Watson surprised many with his solid pace against the regulars on his way to qualifying an eventual 13th on the grid for the pair of races, just seven tenths of a second off pole position.

The start of race one wasn’t a problem for Watson as he moved up to 11th place, before keeping pace recovering pole-sitter Brad Bailey. Sadly a spin coming out of Becketts put dropped Watson back to 14th, but the young Northern Irishman didn’t let this set him back and began to get hid head down, making his way back up the order until he became locked in a great little battle with Oliver Chadwick for 11th place.

After swapping places (and paint) over the last laps regularly, eventually it was Chadwick who came out on top to cross the line ahead of Watson, but Chadwick was later handed a 30-second time penalty for exceeding track run-off limits, promoting Watson to a solid 11th place finish in his debut race.

Now with the experience of a full race under his belt, Watson wanted to show his true potential in the weekend’s second race.

A tremendous getaway when the lights went out saw his HHC Motorsport car leap up through the fighting pack up to as high as sixth coming out of the first corner as they approached Becketts.

Unfortunately contact coming out of Luffield nudged him back outside the top 10 at the end of lap one, but as the race progressed, Watson picked up the pace and latched himself onto a big scrap as team-mate Charlie Robertson was in the middle of a battle with George Gamble and Tom Howard.

Sandwiched between the Tollbar team-mates of Tom Howard and William Foster, Watson made several attempts to pass Howard, with the latter having to use all his defensive experience.

On the final lap of the race, Watson was all over the rear bumper of Howard’s Ginetta when the approached Becketts, where ahead of them a multi-car incident was triggered when Gamble made a late lunge on Bailey that spun him out and caught up Declan Jones and Max Coates. As the midfield worked their way through the smoke, the incident promoted Watson to a superb sixth by the time they crossed the chequered flag.

Reflecting on the weekend after race two, Andrew commented about how much he had learned and enjoyed his weekend. “Its been a great weekend. I’ve really enjoyed it and I’ve learned so much.

“I was a little disappointed not to be higher up in qualifying but my strong finishes in race one and especially race two have really made up for it. I must say a big thanks to my Dad and Wayne Douglas and my sponsors Donnolly Group, Killyhevlin Hotel & Health Club and Hilton Foods Ireland.”