Two from two for Sutton at Thruxton 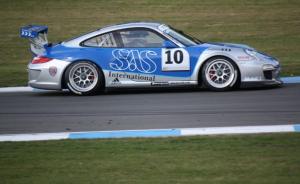 James Sutton rounded off a perfect weekend with his second win from pole position of the weekend at the Hampshire circuit to extend his championship lead.

The 2007 champion was imperious as he again made a perfect start to hold off Parker with Juta Racing’s Euan Hankey into the complex for the first time, and from then on he began stretching out an early lead.

Sutton continued to stretch his lead and was soon out of Hankey’s reach as he cruised to his second win in a row by over two seconds from a hard battle behind for second.

Hankey had an eventful end to the race as he began to struggle with his tyres and dropped into the clutches of team-mate Stephen Jelley, who almost had an opportunity when Hankey ran wide at Church and was forced to defend going into the chicane.

That paid off but on the penultimate lap next time round Jelley again got a great run on Hankey and this time braved it out around the outside into the chicane, taking second as Hankey then got out of shape and jumped across the rumble strips.

Sutton’s SAS Redline team-mate Michael Meadows made good a recovery drive from sixth position to finish in an eventual fourth place, first displacing Motorbase’s Tim Harvey from fifth place before catching Pro-am1 eventual winner Jonas Gelzinis and passing the Juta driver going into the complex late in the race for a fourth place result at the flag.

Harvey’s difficult start to season means he is already a massive 68 points off the lead of the championship, while his ex-rival Michael Caine’s season has been extremely trying to this point.

Caine damaged his car in race one, and could only finish seventh in the second, just ahead of rookie Richard Plant.

Sam Tordoff cold only manage ninth ahead of Rory Butcher who spun at the chicane, while Pro-am2 was won by class leader George Brewster after Andrew Shelley was taken out in a first corner accident with Richard Denny and Steve Parish.