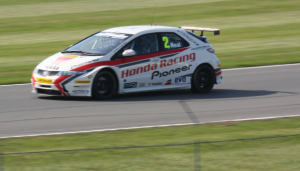 Matt Neal continued from where he left off at Brands Hatch by claiming a second consecutive pole position as he led a Honda Racing one-two at Donington Park.

The double champion had to work for the top spot however as his Honda team-mate Gordon Shedden led for the early stages of the session, before Neal snatched the pole position with a new lap record of 1m10.129 in the process.

Honda’s dominance aside, the story of qualifying was truncated by a total of three stoppages for incidents during the 30-minute session that broke up proceedings along the way.

The first of these was brought out during the first 10 minutes when Mat Jackson – running fifth at the time – lost control of his Airwaves Motorbase Ford Focus trying to make his way around Shedden’s limping Honda Civic at Craner Curves, spinning and beaching his car in the gravel where he would not restart.

After the delay, Shedden’s provisional pole lap was then bettered by his team-mate Neal who went quickest by 0.043s to snatch the pole position, a time that would not be beaten.

The red flags were soon waving at the drivers again when Andy Neate almost repeated Jackson’s error as he got loose at the exit of Craner and spun his car to a halt in the middle of the road at Old Hairpin.

As many drivers took to the grass behind in avoidance, Neate got going again without drama but the session was stopped to remove an advertising board that the Arena Ford had sent into the middle of the road.

Once the session resumed again, Neate again found himself in the wars when, after another spin this time out of Redgate, he recovered straight into the path of Chris James’ ES Racing Chevrolet and the following Tom Boardman, both the SEAT and Chevrolet drivers suffering damage that would keep them out for the rest of the session.

It was the end of what had been a crowd-pleasing but highly eventful day for James, after what was the fourth notable incident for the ES Racing team rookie. He was however not pleased with the driving standards of those involved in the incident, saying: “I don’t know what they were doing out there, it was just crazy”.

The final red flag of the day came when rookie Tony Hughes ended up stuck in the gravel trap at Mcleans after what appeared to be contact with the Vauxhall of James Nash that sent the Toyota driver spinning off the road.

Shedden’s sublime initial effort was his only effort as he ended the second half of the session in the pit lane with broken suspension, the Scot admitting that the Honda pairing’s efforts “won’t be seen again too quickly” by others, as they locked out the front row of the grid, three tenths ahead of Triple Eight’s Nash in third.

Andrew Jordan’s qualifying session was limited significantly by the team needing to make a damper change to his Pirtek Racing Vauxhall Vectra, but his late run saw him post a lap time good enough for fourth on the grid ahead of Arena Ford man Tom Chilton.

His Eurotech team-mate Jeff Smith was a quiet star of the session, consistently posting top 10 times before going on to start a fantastic sixth on the grid for tomorrow’s first race, just less than a second off pole.

Despite his off, Jackson’s early time was good enough for seventh on the grid, ahead of the championship leader Jason Plato. The reigning champion was clearly suffering from the lack of straight line speed not just from the normally-aspirated S2000 engine, but more from the maximum 45kg of ballast in his Chevy Cruze for leading the championship.

While Plato was 1.2 seconds off pole, his team-mate Alex MacDowall was next up in ninth, ahead of Rob Collard for BMW and Paul O’Neill in the Tech-Speed Cruze in 10th and 11th places respectively

A team that suffered a trying day were the AMD Miltek team who suffered electrical problems all day with their Volkswagen Golf, although the team worked hard to get a solid run for Tom Onslow-Cole in qualifying, who managed to reward them with a 16th place result.

“We’ve had an electrical problem all day so it hasn’t been the best of weekends so far”. said Onslow-Cole. “We should be good for tomorrow though”.

Rob Austin also gave his own Audi its first run-out in BTCC, qualifying down in an eventual 21st place behind Frank Wrathall’s NGTC-specification Toyota Avensis.

The Porsche Carrera Cup GB looks set to be one of the most competitive seasons in the championship yet, as Pro-am 1 class championship leader Jonas Gelzinis pulled a shocker by grabbing the fastest qualifying time of the day.

The Lithuanian driver beat a host of strong pole position hopefuls on his way to an impressive first pole in the series for the opening race on Sunday, ahead of the equally impressive Sam Tordoff.

Gelzinis will start the second of the two races from third on the grid, as the second fastest times form the session mean that Michael Meadows will start from pole for the second race ahead of Tordoff.

Tim Harvey could only manage a seventh and a sixth place starting spot for tomorrow, while Michael Caine again struggled to two ninth places only.

While Euan Hankey and 2007 champion James Sutton netted a fourth and a fifth apiece, current championship leader Stephen Jelley struggled here at Donington however, only managing a sixth and a seventh starting spot.

Alex Lynn again snatched the spoils in Formula Renault, although his main rival Tio Elinas from Cyprus took a hard-earned pole for race two as he hopes to break the early Lynn deadlock on the championship.

In the Air Asia Clio Cup, Paul Rivett again showed that he is favourite for another Clio title as he cruised to a second win in three races with the opening race win of the weekend today.

Having got to the lead, he held it to the flag, 1.6 seconds ahead of James Dixon and Jake Packun who crossed the line nose to tail.

Nicholas Hamilton again made the finish of the race, but despite only being less than one and a half seconds off pole, he finished 17th, last of the finshers, as Lee Pattison was the only man not to finish.

Tom Sharp again won in Ginetta Supercup, maintaining his early 100 per cent record of wins in 2011 ahead of Carl Breeze, the most notable retirement being Nathan Freke who went off on lap two at Mcleans on his own.

Charlie Robertson was the star in Ginetta Junior qualifying, but could not hold off Seb Morris when it came to the race, as the championship leader netted another win.